This one was a car show, kinda like Japan's Hot Import Nights. But during the day. With domestics. Plus the weather was pretty decent, so I can't call it hot...

Anyways I had a BLAST at the 2 shows in one (X5 and Dream Car Show). Saw lots of cars owned by people with the same city code as me, that I have never seen before. It was so interesting to see the things people do to their cars over here.

Being a Californian, and black, it was even MORE interesting to see the amount of imitation on the aforementioned status points by the Japanese attending the show. I saw MORE California and Los Angeles related clothing and accesories than I did in LA! Some great things of mention in case you don't LOOK at the pics...

2. Another car has some random bottles of Malibu rum. Why? Nooooo clue...

Anyways here is the album and a few pics that I found especially interesting at this very moment. 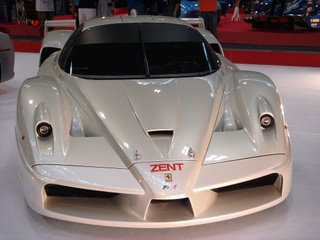 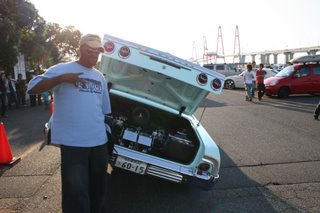 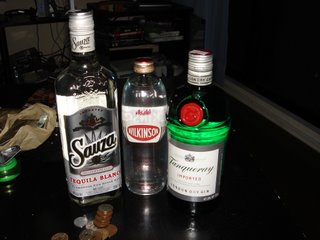 Now I can spend more time at home instead of at bars! 3 drinks at a bar = ONE bottle of one of these. So I AM coming out on top! Just need to buy more stuff to mix with and I am set!

Yesterday I got a new addition to my family... 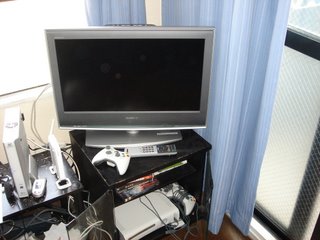 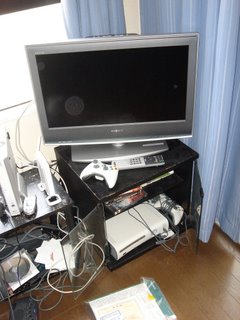 It is a 26 inch Sony Bravia (S2000 series) that supports up to 1080i! This thing is a monster in my tiny apartment, so it is perfect. I did spend a pretty penny on it, but so far it has been super worth it! Getting in HDTV signals for free, which has turned out to be a lot of English programming. Soo happy!

After I got the TV I headed down to meet with some of the friends from training. I had to do OT last night so I only had an hour to spare. We did a Starbucks lunch, until I had to leave, then they headed to HRC.

I rushed to my school to prepare for the OT, then headed HOME to change, THEN RUSHED to the next train station, THEN the subway 5 stops to my location. I was met at the station and walked to the company I was working at and the class was fun and easy! I really enjoyed it!

But the most important thing is, now I can watch movies and play games in HD! HOLLA!

Japanese TV can be funny, when you can understand it!

Proof is in the videos!

Drinks are half off on Wednesday's at C's Cafe and I usually got grab a lot after work with coworkers or alone. So if you ever see weird posts, or get weird emails, you know why.

Consider yourself lucky if you get blessed with a drunk e-style (free style via email). My friend Mark proved to be a master at this the other night!

Got some posters in my room now!

So my mom dropped some money into my bank account this weekend with a message to have a good weekend to go along with it. Well I didn't go out and do dmg to the city, but I bought a couple of posters to liven up my room a bit. I have made myself a plan for home improvement, and the posters were the least expensive, first step of that process.

So in 6 -7 months my apartment should be fully pimped out and comfy for guests, and more importantly, me. Should be able to do a LOT of these in the same month as they don't all cost an arm and a leg. Plus, saving money out here is EASY with no car, gas, and insurance to pay for! Woot for public transportation.

Anyways, here are pics of the posters! 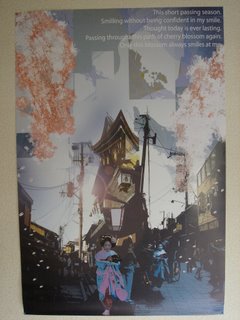 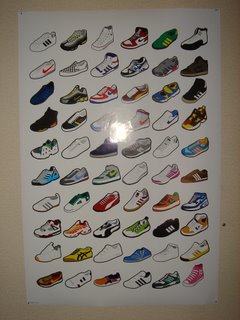 Lost Season 2 just arrived yesterday. 2 awesome Xbox 360 games, and Malibu rum is featured in this photo, but it often has friends! 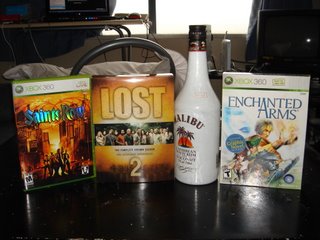 So in my last year of 100% American residence, I definitely noticed the decline in extreme patriotism (read: sometimes hate. Stupid ignorant people) in California (can't speak for all of the US). I really think people did forget the most televised attack on American soil ever! Last night on Japanese TV, they had a REALLY good show on the events that day, and I mean they were in depth! LOADS of replays of the plane hitting the tower, the towers falling, and different stories of people in the tower who survived, and didn't survive.

One story was NEW to me and absolutley amazing! Some guy was in his office, on the floor the second plane hit! In the re-enactment, he was sitting at his desk after he made it to ground level and was told he could go back up to his office, since there was no threat to the second tower. He goes back up and is conducting business as usual and sees a plane heading RIGHT FOR HIS DAMN WINDOW!!! He gets under his desk and braces for impact. The plane hits and explodes into his office, missing him by about 10 feet! Long story short, he survived and made it to the ground floor and lives today! If I find his name I will post info and links to his story, but I never heard about that until 5 years later and in another country!

So to the point... Where were you, what were you doing, on the day America was attacked. My story will come later.

I am getting 1 second or less lightning - thunder response over my head right now for the third time this week. I am soo glad I don't have to be sleeping, but I do need to hop on my metal bike for dinner tonight... It was clear an hour ago... Finally some exciting weather!!!