Dont know what to get your girl for Xmas?

So a while ago I took on an overtime project where I would spend every Monday from 6pm - 7:30pm teaching a low level class that is normally 50 minutes... for 90 minutes.

Fast forward 4 months , and the time came up tonight. Tonight was my last class, which went good as usual and then the festivities began (yes TWO nights in a row!).

We went to Desperados, my fav bar/Mexican food restaraunt and had an awesome time. Now mind you these students are rather low level with their English but some interesting topics were discussed.

1. A short, hairy, pale white coworker of theirs with pretty hair, had sex with one of their cute and gentle coworkers, who has a Brazilian boyfriend, who is also very hairy. Now the girl can't decide who she wants. Eh no different than stuff that goes on in the US. They said this was just ONE of many love triangles.

2. One guy met and hung out with the owner of Square Enix, at his house in Palos Verdes in California. I became enthralled with envy!

4. My student ate some spicy food and started choking and got rice stuck in his nose, that never exited his body the rest of the night. He continued to choke and make such comedic lines as "In my nose, there is rice". Amazing...

5. I learned some new counters in Japanese, and learned that 3 cubes of tofu is called sancho... I had to explain to them what that meant in Spanish, and they all had a good laugh.

6. The above lead to talk of dirty old men paying young girls for sex, so they could buy all the latest fashion. It is rather common here, as you find high school girls with LV and other such bags, that mommy and daddy DIDN'T buy!

All of these were the very memorable moments of the night and I will definitely miss teaching them on my Mondays. They promised to invite me out for drinking whenever they go again, so of course I promise to be there as often as possible! I will miss my fun company lesson folk!

Satoshi, Hiroki, Fumika, and Takeshi, this one is for you! (named in their seat order in our classes)

So yesterday marked my first xmas party in Japan and damn was it fun!

Started off with some dinner and drinking at the same yakitori place I ate at a while back (remember when I drank 10 glasses and came home to pray to the porcelain god?), but this time, I drank till I got a buzz. I got to be Santa-san and host a bingo game to make sure my students won some cool presents. (I think my students won all but one of the prizes). The game was super heated and I got to learn about the Japanese REACH system with BINGO (you yell reach when you are ONE spot from winning and then they stand up, which made the competition awesome!).

Before that we played a game of charades that I had planned and it went over rather well. The only thing I would have changed would have been to keep the other 2 teachers from being in the game, and especially on the same team! But it was just a time killer.

After the festivities, most of us went out for some karaoke (first time in Japan) and fun was had by all. A student and I did some Slipnot, Oasis, and then I did some Justin Timberlake, Spice Girls and some other songs I cant remember. Overall it was a good night!

You can check out a few pics below or the whole album HERE! 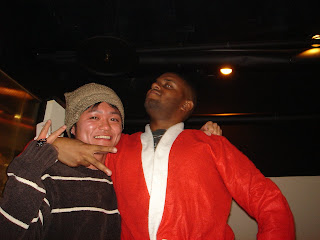 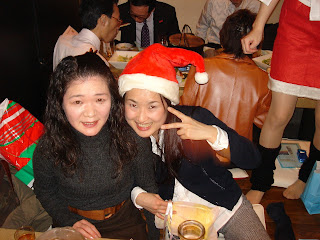 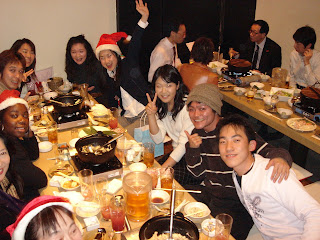 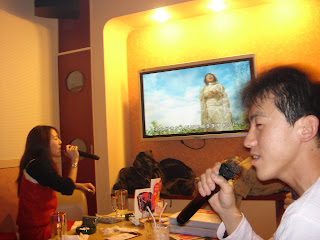